Stay Home, Save Lives! Complete your syllabus with us at the most affordable fee rates. 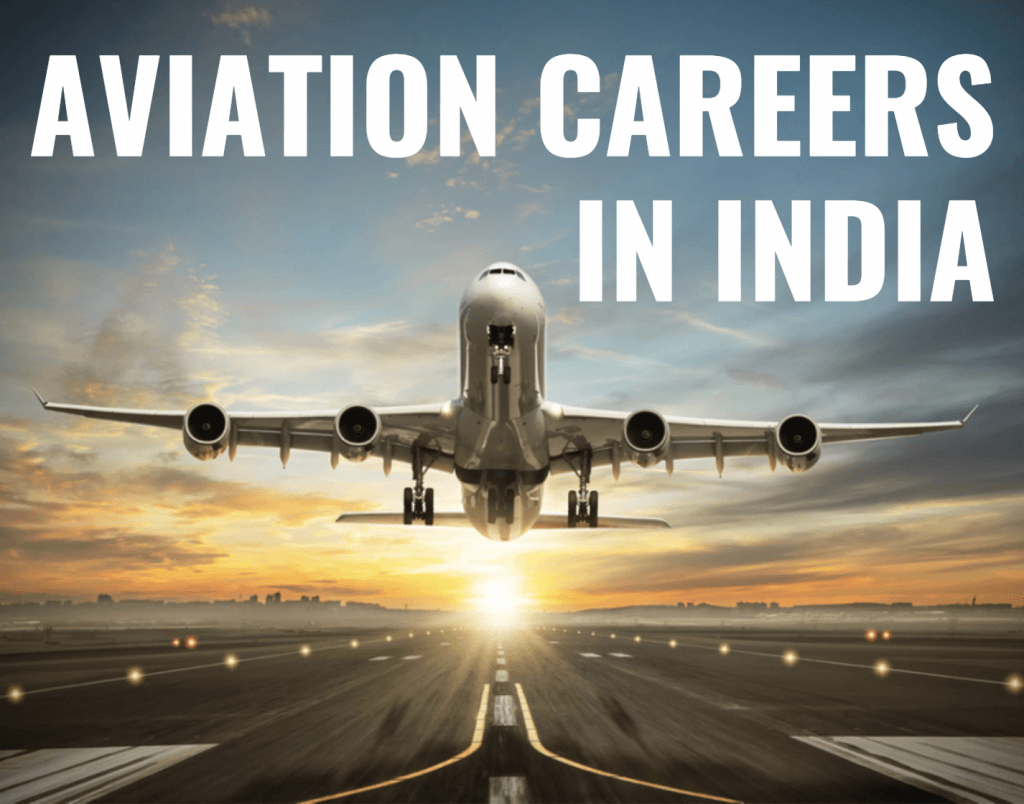 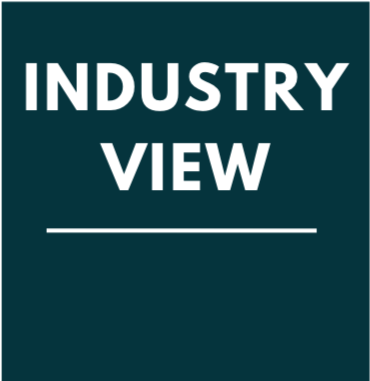 This points to considerable growth in the industry. In turn, careers within the aviation industry in India is set to boom and be rewarding. The industry is already grappling with shortages in talent in most areas such as pilots and technical staff.

India is ramping up airport infrastructure throughout the country expanding capacity and providing access to people for air travel. To cater to the rapidly growing demand, airline operators have been expanding their capacity. New airlines, domestic and international are growing within the country in terms of flight numbers.

A report from staffing firm TeamLease suggests that the aviation sector in India was short of 500 pilots in 2019 against the 1,300 the airlines had on the roster. During the same year, there was a dearth of cabin crew as well—1,350 short of the optimum 4,900. To handle duties on the ground, there were only 9,200 personnel, compared with the requirement of 15,800. The current projections for 2020 point to higher demand for aviation jobs than supply. Last year, the Chief Executive of Chimes Aviation Academy, which trains pilots, Y.N. Sharma said the industry needs 900 pilots every year and around 250 pilots are trained in India every year. Another institute, Frankfinn Institute of Air Hostess Training has been steadily increasing their student intake every year. They train over 10,000 students each year.

In the last two months alone, Indigo partnered with Chimes Aviation Academy for its flagship cadet pilot programme, Spicejet launched their cadet pilot training program, India made commercial pilot licences faster and easier to beat the shortage in airlines’ most-expensive asset – pilots. As Indian airlines start to receive their aircrafts and government launches new airports to improve connectivity, the hiring outlook for aviation in India is looking bright for the next five years.

India’s aviation industry is largely untapped with huge growth opportunities, considering that air transport is still expensive for majority of the country’s population, of which nearly 40 per cent is the upwardly mobile middle class. As accessibility increases in Tier I and Tier II cities, the industry is in for a change.

Rolled out in 2016, UDAN – RCS, a regional connectivity scheme has led to affordable air connectivity from several previously under-served or un-served airports. As on 7 December 2019, 44 airports were started under this scheme. By 20 January 2020, 248 routes were commenced under RCS routes. 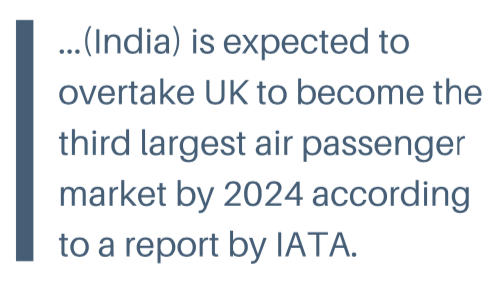 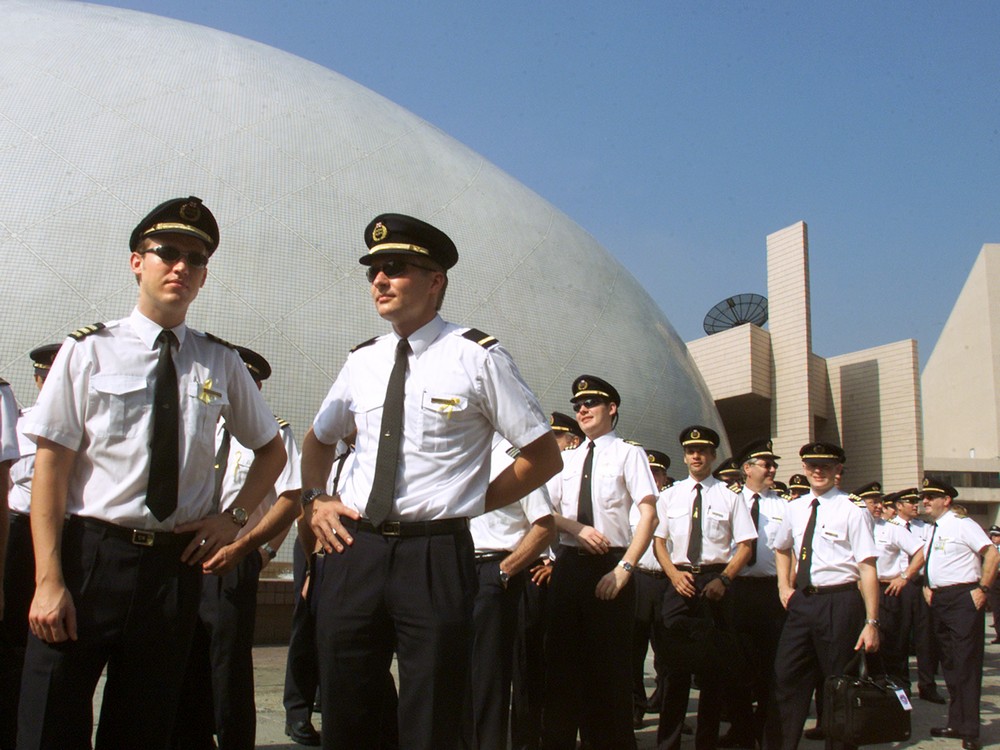 It is known that a growing shortage of pilots represents one of the biggest challenges facing the airline industry. In 2019 June, Boeing CEO, Dennis Muilenburg mentioned that Boeing estimated the number of new commercial airplanes would rise to 44,000, up from 43,000, over the next twenty years.

Demand for air travel is growing so rapidly that 800,000 new pilots are expected to be needed over the next two decades.

The biggest need is in the Asia-Pacific region, where an improving economy has resulted in more people booking flights.

Today, in Asia, pilots from the U.S., Europe and Africa are employed to overcome the shortage of pilots in the region. As pilot training costs come down, demand for pilots well publicised and economies of households in this region improve, there is an immense opportunity for pilots.

Within Asia, China and India are providing most of the growth in aviation as the number of passengers increase.

New programs in pilot training will be created due to this, possibly including financial support. 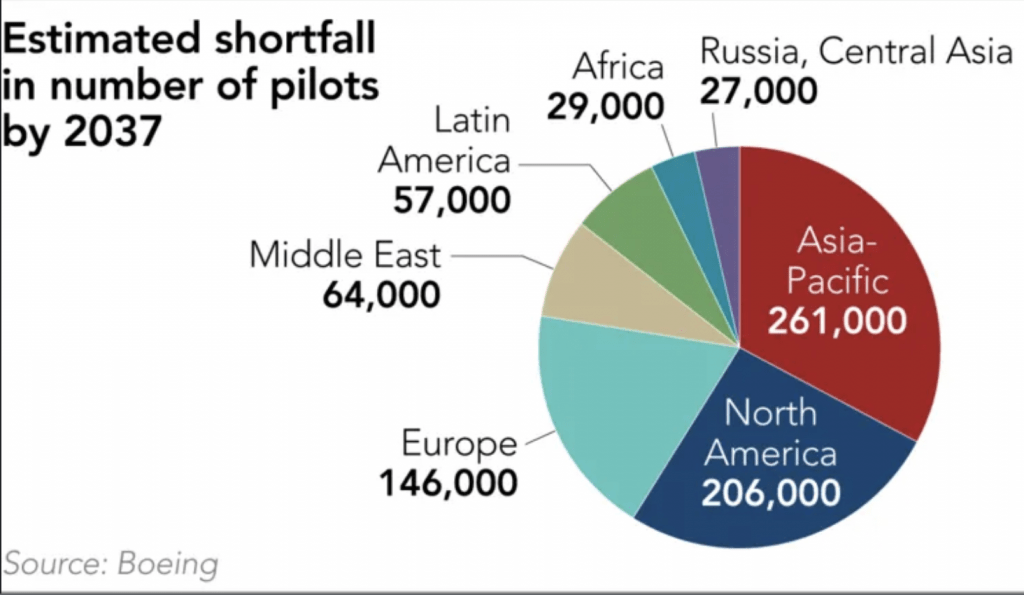 As pilot labor supply remains constrained, airlines are increasingly seeking to recruit, develop, and train locally sourced pilots. Cadet programs that train aspiring pilots to be a qualified, competent, and operationally-ready first officer have increased in popularity as airlines look to fill future pilot pipelines. Airlines are also recognizing the significant cost burden for students, and bond programs have gained traction as another avenue for interested candidates.

As new generation airplanes become more prominent in the global fleet, advances in airplane technology will drive demand for a new set of skills, such as digital troubleshooting and composites repair. Concurrently, operators and MROs will be challenged to ensure technicians continue to maintain the skills and capability necessary to service the large fleet of older generation aircraft. These two skill sets often differ, creating opportunities for the industry to enhance its standard training curriculum 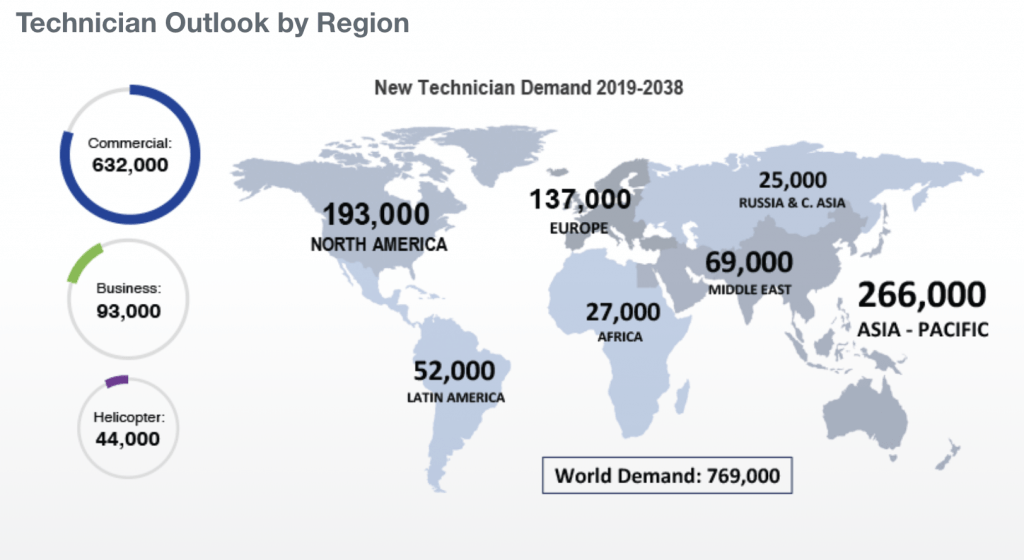 Cabin crew are essential to ensuring the safety and comfort of passengers and can provide a level of service that enables brand differentiation. As airlines continue to refine business models and personalize offerings to specific market segments, additional demand for cabin crew will result from aircraft up-gauging, denser seat configurations, and multiple cabin configurations. Regulatory requirements and customer preferences will continue to drive demand across the industry.

Training continues to focus on providing superior customer service and ensuring cabin crew have the skills to recognize and mitigate safety risks. Advances in scenario-based training and mobile learning technologies support continuous learning and prepare cabin crew for situations that may occur in the cabin. 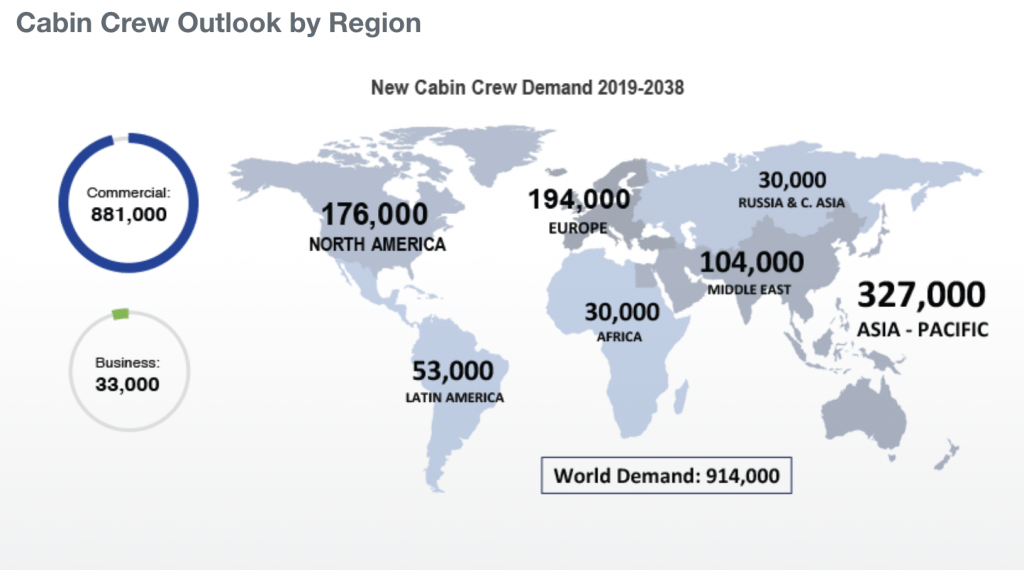 Boeing estimates that new airplane deliveries between 2019 and 2032 would be 44,040. 40% of this demand will come from Asia Pacific region with most of them in India and China.

About 42 % of the market value in aviation during that period will originate in Asia Pacific region with India and China accounting for over 50% of it. 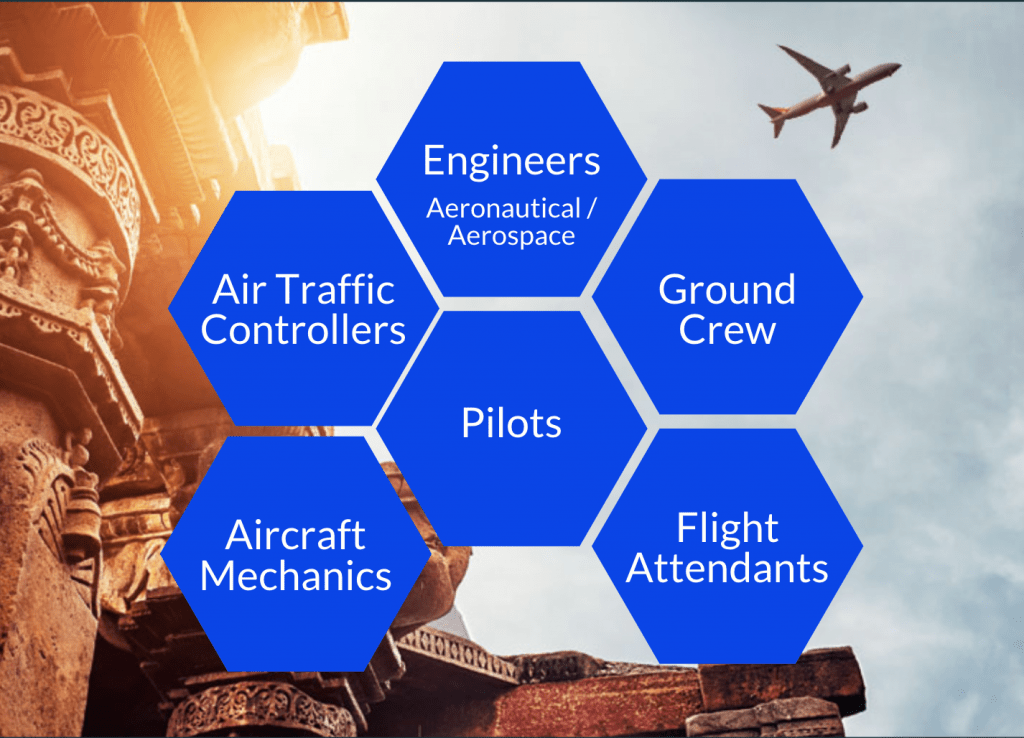 Aeronautical engineers are mainly involved with designing aircraft and their propulsion systems, as well as studying the aerodynamic performance of aircraft and construction materials.

If working for aviation safety and security sounds like an exciting and challenging opportunity, then an air traffic controller career may be in your future.

Air traffic controllers authorize, control and monitor the flow of aviation traffic according to federal and company safety policies and procedures.

if you are excited about fixing an aircraft and making sure it is safe for flight, this would interest you. Aircraft mechanics keep airplanes and helicopters running properly and safely, performing regular scheduled maintenance and checks.

They examine a plane’s frame and parts for defects, determine if any parts are becoming worn out, and determine any mechanical or electrical problems. Aircraft mechanics repair everything from wings to breaks to electrical systems. Aviation mechanic careers include replacing small parts with hand tools and test gauges and diagnostic equipment.

Aircraft mechanics may either work on a variety of aircrafts or specialize in one part of a specific type of aircraft, such as the engine, hydraulics, or electrical system. An aircraft technician career involves interpreting flight data, searching for possible malfunctions or performance problems.They may also be assembling components, installing instruments, and repairing any malfunctioning instruments.

Airline and commercial pilots fly airplanes or helicopters that carry people, packages and other cargo. Commercial pilots also fly aircrafts to conduct rescue and firefighting missions as well as charter unique flights such as aerial photography.

It takes a strong personality, an ability to handle difficult (sometimes dangerous) situations quickly and calmly to pursue a flight attendant career.

Flight attendants offer personal services to ensure that airline passengers are secure, safe and comfortable. Flight attendant careers typically include verifying all safety equipment including oxygen bottles and fire extinguishers are working, discussing preflight briefing and issues, and ensuring an airplane has the required food and drink supplies on board.

Some of the institutes in India that offer certificate, diploma, graduate and post graduate programs in aviation

Some of the institutes in India that offer Pilot Training

Apart from these, are many reputable colleges and universities in India that offer BE and ME courses in Aviation, Aeronautics, Avionics and Aerospace.

error: Content is protected !!
Chat
1
Need help?
Powered by
Hello. 👋 How can we help?